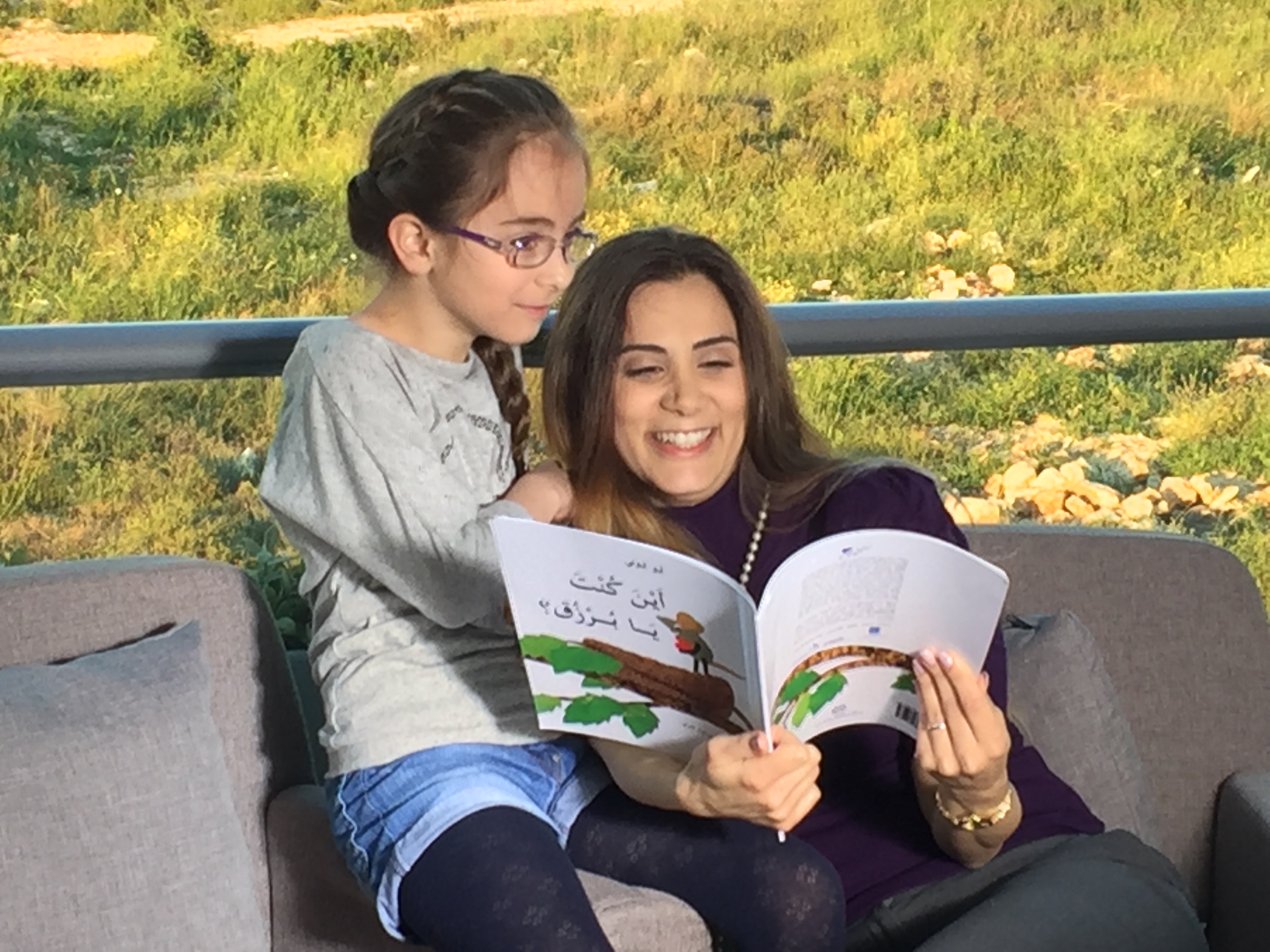 Reading and books for everyone

PJ (aka “pajama”) Library is taking the PJ concept to Israel’s Arab population, with the creation of the Lantern Library (Maktabat al-Fanoos, in Arabic). Now Arab, Bedouin and Druze kindergartens, special-education Israeli schools and some preschools will start receiving books.

The first book to be distributed is a story about a mouse named Soumsoum, and it has already become quite a sensation in Arab, Bedouin and Druze state-run schools in Israel.

Galina Vromen, former international correspondent for Reuters who joined the Harold Grinspoon Foundation more than 10 years ago, launched the Israeli version of PJ Library in 2009, called Sifriyat Pijama, for the Jewish Israeli population.

“Some 215,000 children and their families receive the books, which is about 80 percent of all children in Hebrew-language state preschools,” said Vromen. “The children receive eight books a year. By the time they finish their three years of preschool, they have a 24-book home library.”

Lantern Library is a sister program to Sifriyat Pijama and, like its counterpart, Lantern Library books are delivered by courier to each classroom, with a copy for each child and two classroom copies.

After the teacher introduces a book and usually also conducts book-related activities (i.e. a discussion, a play, an art project), the book goes home to each student and his/her family.

“The books are culturally appropriate, but still chosen with a view to inviting discussion on values – universal, humanistic values rather than Judaism’s specific take on a value,” said Vromen. “But often, it comes down to much the same concepts, like honoring parents, being hospitable, visiting the sick, caring for one’s community and helping others.”

Lantern Library, like Sifriyat Pijama, is funded and operated in partnership with the Israeli Ministry of Education. But with Lantern Library, “We also work with the California-based Price Family Charitable Fund, which has long been active in funding and operating programs for young children and their parents in the Israeli Arab community through its Bidayat (Beginnings) Early Childhood Centres,” said Vromen.

The foundation and the Price Family Charitable Fund committed to start a pilot project this year, with or without the ministry, offering to provide additional matching funds if the ministry came on board.

“The ministry did find some funding, so instead of our initial plans to start with 5,000 children, we ended up launching a program for close to 50,000 kids,” said Vromen.

The most immediate goal was to get good books out to every classroom and to each child. Other goals were to ensure teachers understand how to effectively integrate the books into the classroom and to understand their role in encouraging parents to read at home.

The books have been received with great enthusiasm, added Vromen. “The teachers are extremely positive and send us lots of pictures of the activities they do with the kids. We post some on the program website, which is also exciting for the class.

“The parents are delighted to be getting the free, quality books. Arab parents, like Jewish ones, recognize the importance of education for their kids, and know that starts with books.”

According to Vromen, some Arab families have many books in their home and some have none. “Like elsewhere, people who don’t have a tradition of reading or don’t have the resources to buy books, don’t have as many as those who do,” she said. “Arabs have a long, honored tradition of oral storytelling. In many cases, this takes the place of a tradition of reading. We hope the practice of reading books together in the family will flourish alongside the oral tradition, reinforcing and complementing it.”

Vromen said with a smile, “I’ve yet to meet a child who, when given a choice between going straight to bed or being read a story first, chooses to go to bed without a story. It’s not just the reading. It’s the cuddling together, the looking at the illustrations together, and talking about what the characters feel or what might happen to them next that creates an emotional attachment to books, as well as, of course, enhancing the parent-child relationship.”

The foundation has considered electronic books, but has found that, for now, the time is not yet right. “The online book industry is much less developed in Israel than in America, so it’s still rare for Israelis to read books in Hebrew online,” said Vromen. “The issue is whether or not online books can provide the same emotional experience between parent and child as a paper book. The jury is still out on that, but as an avid electronic book reader myself, I personally don’t see a problem.”

Maktabat al-Fanoos, Sifriyat Pijama and PJ Library, according to Vromen, are all based on the concept known in Judaism as “girsa d’yankuta” (Aramaic for “learning with one’s mother’s milk”). This idea “assumes we develop a lifelong attachment to the stories, narratives, rituals and concepts we imbibe as young children,” said Vromen. “Parents don’t always realize how fleeting those early childhood years are – how sweet and also how precious is the opportunity to read and talk to children about things that matter. So, I hope they seize that opportunity.”

To learn more about Lantern Library, visit al-fanoos.org. English is available by clicking on the top left “En” button on the home page.