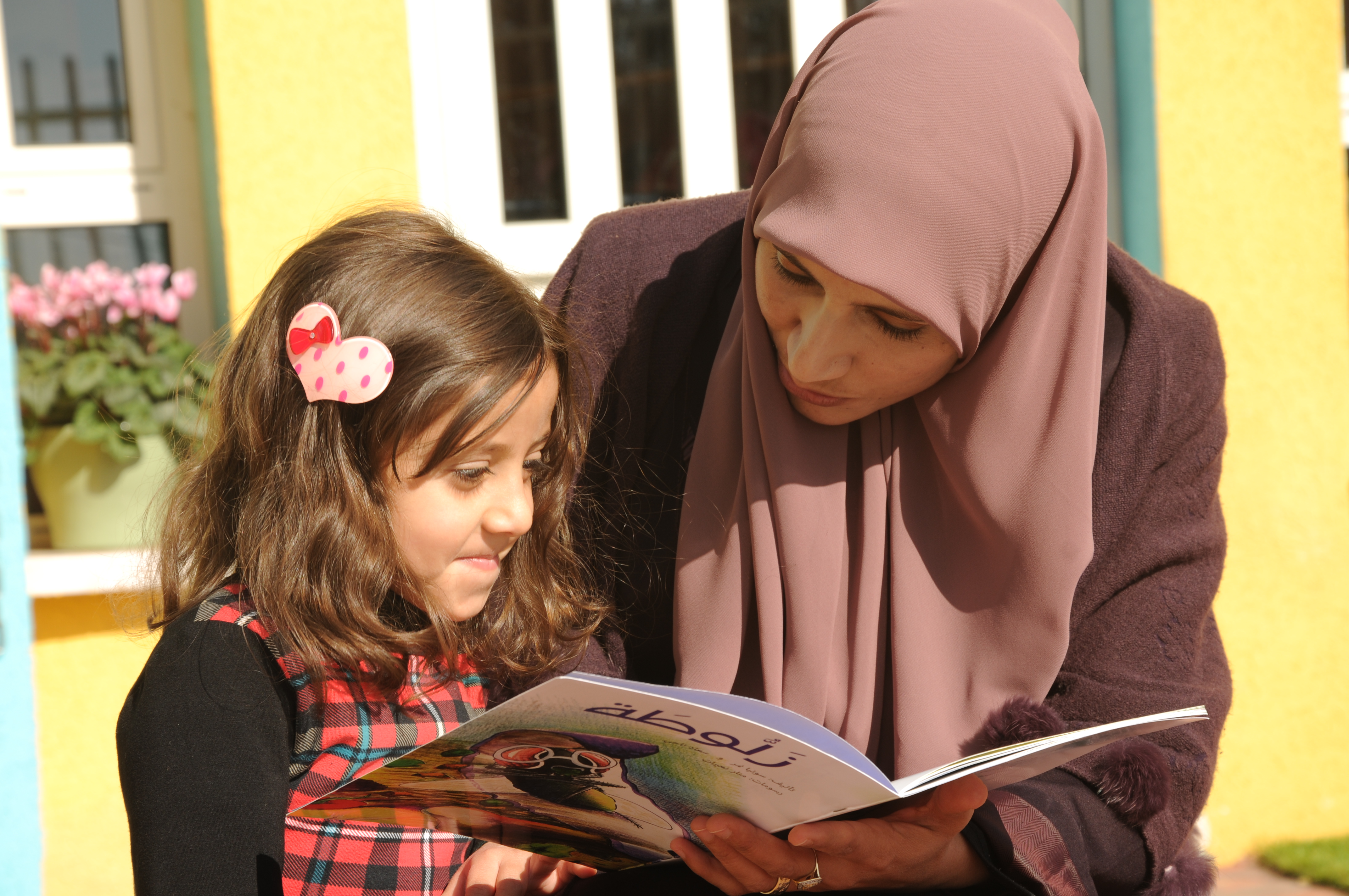 Jaffa, Israel – The children at the Arabic-speaking Ofek preschool in Jaffa have spent a lot of time this month thinking about a mouse named Soumsoum, the character of a picture book all the kids read with their parents at home.

In class, the children did a range of Soumsoum-related projects inspired by the book, “Soumsoum the Mouse,” by Jabil Khazaal, about a field mouse who relaxes while the other mice gather food for the winter, but who later warms the hearts of the worker mice with his colorful stories.

The children discussed the emotions portrayed in the book, and learned that every creature has a role to play in the community – and that food for the soul can be as important as food for the stomach.

In the process, the children fell in love with the book and are eagerly awaiting the next one.

Throughout Israel, 45,000 Arab children (including 100 percent of the kindergarteners) in government preschools are reading “Samsoum the Mouse” as part of a reading-readiness program called Maktabat al-Fanoos, or Lantern Library.

The program, which began last month, is modeled after Sifriyat Pijama, an organization launched five years ago that distributes Hebrew children’s books to hundreds of thousands of Jewish preschoolers. Sifriyat Pijama is a sister program to the fast-growing PJ Library program in North America, which has distributed more than five million Jewish books and music CDs to over 175,000 children in the past eight years.

The Lantern Library was created by the Ministry of Education in partnership with the Harold Grinspoon Foundation and Price Family Charities Fund with the goal of providing children with four books to take home and treasure over the course of the year. Next year the goal is eight books.

Culturally appropriate and with a strong story line conducive to discussions on values and emotions, the books encourage parents and children to lay the groundwork for reading. As with books in the Hebrew-speaking sector, the Arabic books are chosen by a selection committee composed of experts in child development, children’s literature and preschool education.

On the occasion of a visit this week by the Price family to the preschool, Keefah Masri Bassel, who teaches the 3- and 4-year-olds, said the program has transformed her classroom.

“The first time I held one of the books, I began to dream that every child would have a shelf in their room reserved for their books,” Bassel said.

A week later the teacher invited the parents to the school, where she taught them how to create a library corner at home. The parents helped the children transform T-shirts into book bags and create “This Library Belongs to…” signs.

When the children went outside for breakfast, a speech language expert discussed with the parents ways to cope with the differences between spoken and written Arabic, and how to best engage the children (allowing them to retell the book in their own words, for example). Together, they explored the parents’ guide at the back of the book.

Galina Vromen, executive director of the Grinspoon Foundation in Israel, said the Arabic-language program presented the organizers with some unique challenges. One of them is the dearth of quality Arabic children’s books that are accessible to the Israeli market.

Vromen said the program “is largely dependent on what’s produced here in Israel, Jordan and Egypt,” and noted that, due to political unrest, the annual Egyptian book fair, once the largest Arabic fair in the world, has been discontinued. Turmoil has also affected children’s book production in other nations, including Syria and Iraq.

Due to the Arab boycott of all things Israeli, some Arab publishers have refused to sell reprint rights to Israeli publishers, who repackage the books, with a parents’ guide, for the program.

That’s one reason the program has an interest in supporting the local Arab Israeli publishing industry, which clearly benefits from a sale of 45,000 copies, whether the book is an original or reprinted.

“We want strong readers, so we need locally made books,” Vromen said, adding that “there’s tremendous excitement” about the program in the Arab sector from publishers, teachers and parents.

These same teachers and parents say the literacy program is particularly important for Arab children because it introduces them to written Arab, which is different from spoken Arabic, at an early age.

“Our goal is to encourage reading readiness with exposure to classical Arabic,” said Vicky Glazer, the supervisor of Jaffa preschools.

Sandy Abu El Adas, a speech language pathologist from the Hirsh Childhood Development Center in Jaffa, said Arab children in Jaffa have fewer skills at the start of preschool than their Jewish counterparts due to socioeconomic gaps.

“Arab children in Jaffa are usually less prepared and less exposed to literature than Jewish children their age because of their families’ financial situation. Jews from the same socioeconomic level have the same problems.”

Fatma Abu Ahmed Kassem, national supervisor of preschools for the Arab sector, said the program’s emphasis on interaction with adults “is critical to learning. Reading books offers an opportunity for quality adult interaction with children at home and in the classroom.”

The program, Kassem said, “promotes and enhances a culture of expression and discussion, and raises the awareness of language and enriches language use. Exposing children to a variety of literary works of Arab literature and culture as well as world literature encourages children to become curious and enthusiastic readers.”

Watching as the preschoolers at one table created mouse masks and those at another pretended they were mice searching for food for the winter, Vromen expressed the hope that, next year, the program will be able to serve all 70,000 children attending government preschools.

That, she said, will depend on Ministry of Education funding and matching grants from the American foundations.